110 years ago today – Titanic Sinks with A. O. Holverson Aboard

110 years ago today, late on April 14, 1912, the “unsinkable” RMS Titanic struck an iceberg. Among those that perished was Alexander Oscar Holverson, who had grown up in Urness and Alexandria in Douglas County, MN. One of Mr. Holverson’s last known actions was to pick up his wife and place her into a lifeboat to convince her to leave him behind.

Alexander Oscar Holverson (who sometimes went by Oscar or Oskar) came with his parents, Mr. Amos/Amund Holverson and Mrs. Rachel Holloque Holverson, to Douglas County as a youth. They lived in Urness for a time before Alexander attended school in Alexandria. He worked for a clothing business owned by James Dent and with J. H. Letson at the Letson House Hotel, today the Alexson Apartments. 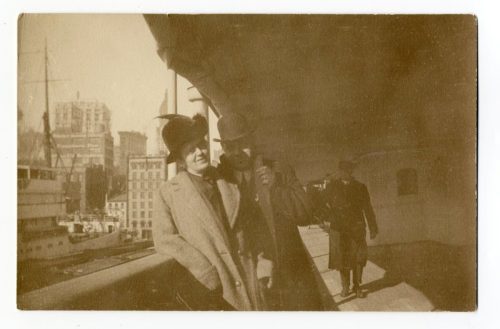 He left Alexandria and continued in business – moving to St. Paul to work for the Boston Clothing store. He and his wife, Mary Aline Holverson, were travelling the loop between New York, Panama, Buenos Airies, London, and back to New York when they boarded the Titanic.

Per an article from the Alexandria Post News, on the night of April 14-15th, 1912, Alexander was soundly sleeping, but Mary was awake. Mary felt the collision of the Titanic with the iceberg, which was alarming but did not feel like immediate danger and woke Alexander to go investigate what happened. The crew told Alexander there was no danger and to return to bed. However, when he returned to their room, Alexander instead told Mary to dress and they quickly proceeded to the deck, where lifeboats were being lowered.

“You get in a boat,” said Alexander, but Mary initially refused, unwilling to leave her husband behind. “I cannot come now,” replied Mr. Holverson. “Only the women now. I will come later.” Mary still refused, but Alexander picked her up and placed her into a lifeboat with his assurances he would be in a later boat.

Mary believed Alexander’s promise that he would meet her later and watched for him in the other boats as they were rescued and brought onboard the Carpathia. She could not believe he had died in the disaster, even as the survivors were landed in New York City. Alexander’s remains were among the first recovered by the steamship Mackay-Bennett and were brought to Halifax, Nova Scotia, then to New York City where Mary was waiting. Burial was arranged in Woodlawn Cemetery in the Bronx. 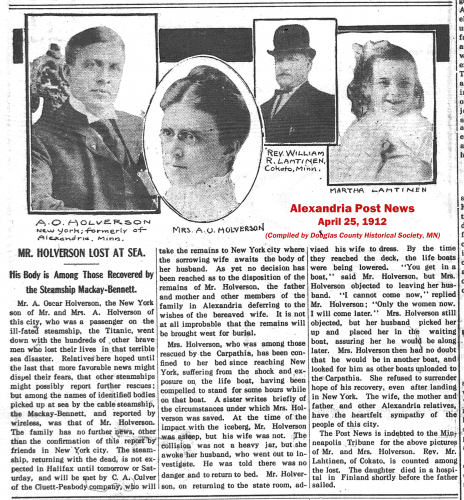 A saltwater-stained letter that A.O. Holverson had written on April 13th to his mother in Alexandria was found in his pocket notebook when his body was recovered. He had intended to mail it when they arrived in New York. A.O. Holverson wrote that the Titanic was “giant in size, fitted up like a palatial hotel,” with excellent food and drink, and “If all goes well, we will arrive in New York Wednesday AM.”

His letter was returned to a family member, potentially his wife. In 2017, the letter to his mother in Alexandria was auctioned for $166,000, a record setting amount,  by the Auction House Aldrige & Son, who also released the photo of Alexander and Mary posing together on one of their journeys.

Alexander’s parents, Amund/Amos and Rachel are buried today in Kinkead Cemetery in Alexandria, MN. When his remains were brought to shore, Alexander Oscar was buried in Woodlawn Cemetery in the Bronx in New York City, where Mary would also be buried after her death in 1918.

Darrel and Larry Holverson of Douglas County (along with their families) are Alexander’s only living relatives.