Archival Footage from DCHS of the March 3-4, 1985 Blizzard, recorded in Alexandria Minnesota. Volunteers Sheila and Sharon recorded footage of the massive piles of snow and talk to local residents who are out and about on the snowy streets. At the time, the Douglas County Historical Society was located at 206 Broadway, in the same building as the Runestone Museum Foundation. Today, the Douglas County Historical Society is located at 1219 Nokomis Street in Alexandria, MN.

If you recognize any of the interviewees in this video, please let us know!

The Minnesota winter of 1984-85 had been uneventful. From January 1 to March 1, there had only been 1.5 inches of snow. On Feb. 28, the temp. reached the balmy 50’s. That promise of spring changed suddenly on Sunday, March 3, and continued unabated into March 4. In those two days, Alexandria received over 17 inches of snow. Wind gusts up to 50 mph battered the state. Huge, dense drifts closed roads and made travel impossible. Local plows were pulled from the roads.

Thanks to the DCHS archived copies of the Lake Region Echo for March 1985, we can get a glimpse into the stories of kindness and hardship that played out during the storm. The Holiday Inn was overflowing with 281 guests who came off I-94. Many more travelers were referred to other area motels. Hotel employees worked almost nonstop, and guests helped out. A busload of 50 stranded teenagers on their way from Grand Rapids to Morris spent Sunday night at the Assembly of God Church on Broadway. Neighbors helped each other clear snow and shovel out cars. Schools and most businesses were closed Monday and Tuesday, but some grocery stores stayed open. Drifts downtown were waist deep.

The storm claimed seven lives in Minnesota, including one Alexandria man. Lyle Holcomb, age 67, was discovered behind his shop “Lyle’s Signs” on 3rd Ave., by a friend who went to check on him early Tuesday morning. His friend hurried to Jill’s Gas and Grocery to call an ambulance. Lyle died of hypothermia later that day.

Three baby boys were born during the height of the storm. The Lake Region Echo’s Wed. March 6th edition featured photos of these “Blizzard Babies.” Elwood and Jody Anderson welcomed baby Matthew, born on March 3rd. Expectant parents Scott and Virginia Nelson of Evansville started their snowy journey to the hospital in a Douglas County sheriff’s car, which was met at Brandon by an Alexandria Fire Dept. vehicle for the rest of the trip to Alex, where little Lee Nelson was born on March 4th. Richard and Faye Lee welcomed baby Zachary on March 3rd. A snowplow sent to the Lake Jessie area on March 4th cleared the way for yet another Douglas County Sheriff’s car, sent to help an expectant mother reach the hospital. The babies kept coming – three born on March 5th, and remarkably THREE sets of twins and two additional girls born in Alexandria on March 6th.

Technology has changed since 1985, with mobile phones and advanced weather warnings, but Minnesota blizzards still have the power to shut down travel and change our plans. And then as now, we are thankful for our emergency workers who go out in the worst of it, to clear our roads and make sure we are safe. 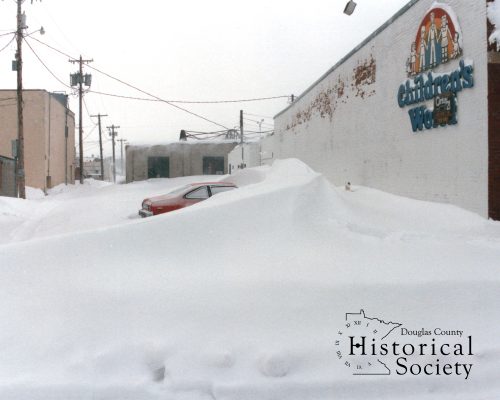 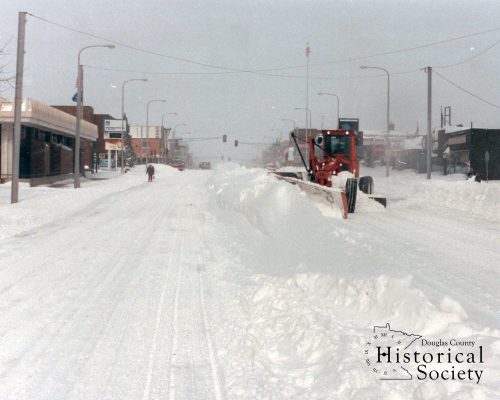